Growing Up and Not Wanting to Speak the Baby (Minority) Language

This was the language situation in our home for at least 8 years. However, recently, the younger ones have been speaking more and more English. At first, it was only with each other, because they knew that if they addressed me in English that I would ask them to switch to German and that I would only answer in German. The older kids also tried to continue to speak in German to them, but it has been more and more difficult.

Recently, I had an insight as to one of the reasons why the little ones are no longer speaking as much German (the minority langue) to us. I think it has to do with getting older and wanting to be one of the "big" kids. Their whole life, they have observed their older siblings (who are their favorite people in the world) speaking English to each other. 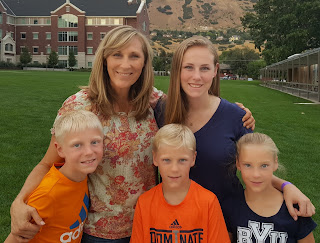 They adore their big sisters and brothers. And all this time, they have noticed that the big kids speak English to each other, but German to them. This used to be fine, but now the little kids are getting old enough to want to be a part of the "big-kid-club". I think they see German as the baby language and they no longer want to be considered "the babies." They want to join in the English conversations that the older siblings each other as equals. They want to feel like they are old enough to be addressed in English!

So, that said, what can I do to help encourage them to keep up with their German? Well, I'm still trying to figure that out. This summer, we had some of our young adult kids home from college, so the little kids were constantly around them and they were always wanting to speak English to them. However, just a few weeks ago, we sent the last of our "big kids" off to college (see picture). So, now, it's just my husband and me and our three little kids. With the older kids gone, there isn't as much social pressure to speak English. I'm hoping that we can continue to have times when we speak more German.

I've been thinking about this new language development in our family. And I think it's only fair, now that the little kids are older, that we come up with a system that doesn't make them feel inferior or not included. So, perhaps, when the college kids come home, we can try to ALL either speak German or All speak English. As far as that goes, maybe I can try to speak German to my husband more often, too. Our former system served us well for the many years, but now we need to reevaluate our bilingual goals and come up with a system or language routine that will continue to foster growth, language, and family unity. I still don't know exactly what that looks like, but I do know that we want everyone to continue to learn and love our target language as well as feel connected to each other, because, really, that's what non-native bilingual parenting is all about!!
Posted by NinaBoBina at 4:57:00 PM

I am a mother of 8 beautiful children, including 2 sets of twins. My husband and I live in the Pacific Northwest. I grew up in California, Germany and Michigan (in that order). I graduated with a B.A. in German Teaching and an M.A. in Language Acquisition. And I LOVE, LOVE, LOVE being a mom!